They say “you can’t take it with you,” but I say you can – by creating a Memory Book.

Selling our beloved family home after our parents died was a gut-wrenching experience. It had been our anchor for more than half a century. We couldn’t save it. None of us could afford to live there or buy the others out. But I was determined to take it with me – to make a record of it, to take photos of every nook and cranny, every scratch and paw mark – before we started to clean it up and give things away.

The result was a big, square hardcover edition that everybody loves. Every room has its own double-page spread, with close-ups of drawer pulls, window screens, door latches – whatever spoke to us in that room. Even the mess is there to remind us.

Once I started that project (see how we did it below) I was on a roll. My brothers and I were unearthing fascinating documents related to our family’s history. We had already discovered over 2,000 letters – many written by Mum during her lifetime. We wanted to make sure future generations saw these – especially grandchildren.

Most children aren’t interested in family history until they get old. As a child, I used to roll my eyes when Dad tried to interest me in it. So I started grouping things into three categories I thought might peek their interest: Adventure, Mystery and Romance!

Once I had enough material – letters, photos, documents, I created a short Memory Book. “Short” is the operative word. You want to keep the story short and spicy – with lots of big pictures and a good title to lure them in.

There are many good websites that allow you to create photo books online. I used Treasure-Book in Vancouver because they’re a Canadian company. They’re extremely helpful on the phone, and their work is great. I particularly love their binding on their hardcover editions—it doesn’t fall apart.

Here are a couple of my Memory Books.

My great-grandfather, George Lind, was captured at sea with his father in 1805 during the Napoleonic wars when he was only twelve years old. He was held in French prisons until 1813. During this time, he kept a diary. He also carved a ship – which for years sat in our upstairs hall. We found his leather wallet, along with his diary and many travel documents so I took photos of these to include in this book. In his diary, he refers to a small compass, and when we found it in amongst Dad’s things, we were thrilled. I used scans of the endpapers from his wallet to create the cover and superimposed a photo of his portrait on top. I put a photo of the ship he carved on the back cover. Other fascinating letters formed an intriguing mystery about his son, so that’s in here, too!

During World War 11, Dad had escaped from Singapore in 1942 by buying a little boat called the Sederhana Djohanis and sailing across the Indian Ocean. He was rescued near Ceylon and taken to NYC where by chance he met my mother.

This nugget of a story resulted in an Adventure/Romance Memory Book for grandchildren. We had found Dad’s notes about his escape, the original logbook of the Sederhana Djohanis, some relevant photos, plus a letter Mum had written to her mother when she met Dad in NYC. The book is only 22 pages long.

I scanned the original logbook and replicated it on the cover. My own synopsis of the events is only one page long. The rest of the book is almost entirely comprised of photos and scanned letters.

Creating your own Memory Book

When our parents died, the biggest treasure we found were hand-written letters, photos, and documents–spanning several generations.  We could have left them in boxes, or framed a few, but that would be missing the big picture – stories are hiding in there! The task of sorting them seemed daunting, but we devised a system that was easy and fun and resulted in hardcover books for future generations to enjoy.

You can do this, too. Here is what you will need:

• Clear plastic sleeves.  These are called letter-size “sheet protectors.” Don’t stint on quality. If you’re going to do all this work, make sure it lasts for generations to come. Buy the acid-free, archival quality. They’re available 3-hole punched, in boxes of 100. We bought ours at Staples, but most office supply stores carry them.

• 3-ringed binders. (Various widths according to your needs.)

• Computer with Internet access and scanner if you’re planning to make a photo book.

We did this mindlessly, while watching TV.  Open the letters, flatten them and put one complete letter (no matter how many pages) into one sleeve. Include the envelope, if there is one, to preserve the postmark date.

TIP: When sleeving the letters, make sure the holes of the plastic sleeve are on the left-hand side and the open edge is at the top. (You don’t want letters to slide out once they are in the binder!)

Once all the letters are sleeved, sort them chronologically, by date.  This is why the envelopes are important, because when letters are undated, the envelope gives you a postmark.

Group your sleeves into binders.  In our case we had so many letters we needed one binder per year.  Some binders are thin, some are wide: we bought sizes according to our needs.  The binders came with a slot on the spine for a label.  We labeled them with the year, name, and a brief description of the contents.

Sleeve appropriate photos or ephemera and add them into the first few pages of each binder to give the letters context.  For example, in our 1944 binder, we have included my mother’s passport, my father’s driving license, his Navy papers and some relevant photographs.

We have some years in which a great many letters were written (when couples were separated by war, for instance, when they wrote to each other every day), so we have a few binders that are Book 1 and Book 11 of the same year.

This is the fun part. Look for stories that shout ROMANCE, ADVENTURE or MYSTERY. Every family has them. By the time you have sorted the letters, it is likely that some stories will reveal themselves.

One thing we’ve learned is that most children or grandchildren are disinterested in family history until they enter mid-life, themselves.  To counteract this, we decided to feed it to them in small bites.  Whenever we felt there was an adventure,  romance or – better still – a mystery, we culled it and formed it into a photo book.  We wrote the synopsis – making it intriguing and captivating – using as many photos as we could find. We gave it a racy title, an exciting cover, and uploaded the files to our favorite online site. We got back a hard cover MEMORY BOOK that grandchildren like to read.

There are many online companies that will produce photo books. We used a company called Treasure-Book in Vancouver, Canada, because we liked their formats and binding, but there are many others, all roughly the same price. These companies have their own software that allows you to layout your book and type in your story. It’s easy to follow the prompts. Some companies, like Treasure-Book, will help you over the phone.

Digital scans are another option

We decided to digitally scan the more important binders, so we can eventually upload to a family genealogical website. We hope the contents can be saved for future generations to access.

This is a more onerous task that can be done over time. The individual pages of each letter must be separated into yet more sleeves, in order to be scanned front and back. They can be done one at a time, in the safety of a binder, so they won’t get misplaced.

We found a trusted local copy shop that scanned the sleeves for us at $25/hour.  An 80-page binder cost $40.  We preferred to do it locally, but there are cheaper alternatives.  One company in the U.S., for example, will send your box of photos or letters to India to be scanned.

We ended up with more than 30 fat binders, but together they tell many stories of our family’s history.

“Digital Dreaming” by R. L. Black. I was recently contacted by Rod Black in Australia, who has just published a step-by-step guide on how to sort and organize digital treasures: photos, documents and other keepsakes.  It’s now available online, and you can have a look by clicking here 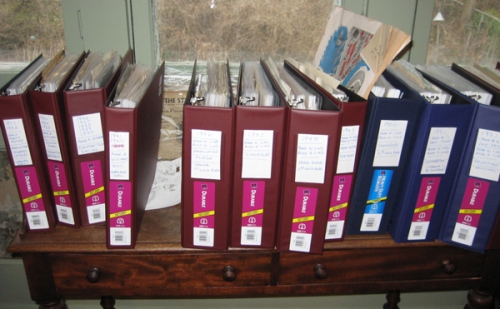 One response to “Memory Books”